It has a silly logic Merge node error at version 0.180.0 and newer one

I do not know what cause this, but I will show you what happened

You could see at this case. My workflow stop at “Set” node without reason.
It just stop without logical for “Set” and “Merge” node. It’s so silly!

Look at my workflow: 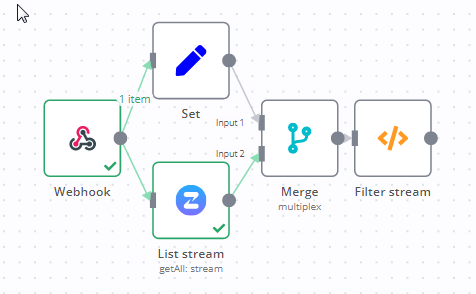 This is my workflow:

Hey @cmdntd987, I am sorry to hear you’re having trouble. When running your workflow, did you by any chance see the error message described here?

I think that 's it.
You could merge my topic to, because mine has execution data for that issue.

It looks like merge node misunderstood that the before node (set) was done, and have undefined data. It looks like there a single route forced to run, instead of full route (set node and zulip node, includes) or more to merge.

Anyway, I think that is a very serious issue.

Anyway, I think that is a very serious issue.

Good news, this should be solved soon. [email protected] containing two fixes for this has been released and is currently being built. It should become available in the next 30 to 40 minutes.