Hi @Martin_Neumann, many thanks for reporting this.

You raise a good point, I think our time zone designations can be confusing because they don’t take DST into account like in this example: 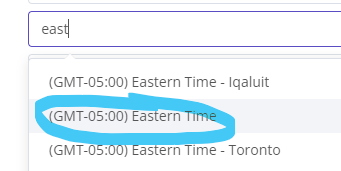 Eastern Standard Time is 5 hours behind GMT/UTC, while Eastern Daylight Time is only 4 hours behind as you have mentioned. I’ll add this to our internal bug tracker for a closer look.

Alright, I got this part. Just checked and Eastern Time is actually in GMT-5, but when observing DST it would be actually GMT-4. So not sure what is the least confusing way to deal with that. But for the example of São Paulo, they had DST in the past, but for the last few years there is no DST anymore. It should be at GMT-3 straight. I guess that São Paulo was put into the wrong time zone.

Hi @Martin_Neumann, good point. I can see @Jon has already flagged this internally following this GitHub issue, so we will be looking at updating the time zone definitions and will update you once this has been done.