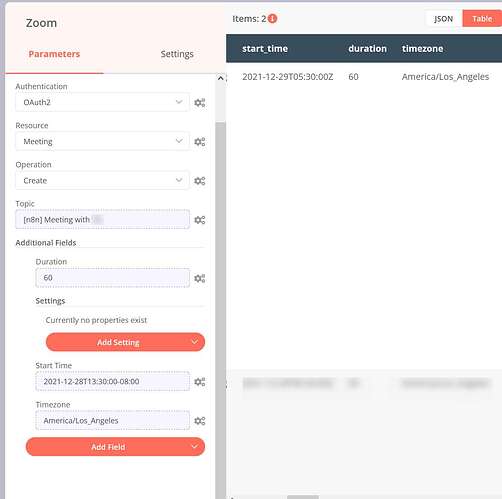 Thank you for reporting this. It seems like there is a bug with the node. I tried the same with the different timezones and I faced a similar issue. One thing that I noticed was that when creating a meeting without the timezone option, Zoom created the meeting correctly, but displayed the wrong timezone in the response. I will investigate it further and keep you updated.

:bug: Override default timezone when timezone is defined in the UI - Zoom node

Awesome, thanks. I tried to update it in docker, and I think it worked. The version in help:about is 0.156.0. And It is still bugging for me. I’m pretty new to docker and n8n, so I may not have updated it properly. Help?

@Jason_Jason the fix put in has not yet been merged into the main code and released.

Thanks, @Jon. Any chance this was done yet? Not to be pushy…

And, I apologize, I’m not familiar enough with GitHub to figure it out myself.

Just took a look and it doesn’t look like it, I will check our internal tracking system to see where it is in the queue on Monday morning.

Just checked the internal board and there are a few things higher up on the review list so it looks like it probably won’t be merged in the next couple of weeks.

If you are running n8n with docker you could make a custom image to get you by but it is a bit of a fiddly process.

Too much fiddling for me!

Thank you for checking.