Hello it more a general question for N8N workflow
but i use this exemple for a better understanding.
my workflow is working fine but i have two event created for the same.
I would like to understand this loop. I see that this happens often for my flows.
Even it’s differents jobs i have several times multiples results that i don’t want.
It’s not logical for me. I saw that depending on the path I defined the handling is different.

Can you explain me why i have in this flow to events ?
How can i control the numbers of results not needed ?
What is the key logic to build the path (everything in serie , use paralelle for specific type of datas …)

the result of the workflow 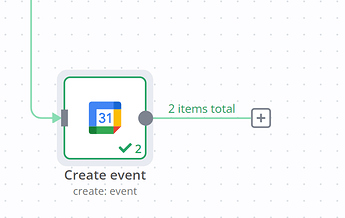 Hi @Thierry66, from taking a look at your workflow your data is essentially duplicated on the Notion meeting page node. This node connects to two different branches. This is fine in itself, but you then have two separate items (one from each branch) going into your Set Example Data node. Meaning everything from that node onwards runs twice.

So, you would typically want to avoid such a construct. Perhaps you can remove the direct connection between Notion meeting page and Set Example Data? Then make sure your workflow doesn’t stop on your Notion_blocks node by enabling the Always Output Data setting of the node:

And lastly, connect the False output of your IF1 node with your Set Example Data node to make sure the flow continues even if your IF1 condition isn’t met.

The only part did not work is connecting the false branch of the IF1 (because it give me datas in both), because it’s data that i want to filter out to trash (having a bean node will be interresting to have for workflows)
That reply to my question which is a workflow needs to be build in serie.
result:

Ah sorry, I thought you’d wanted to create the event regardless

. Anyway, glad to hear you sorted it out!

This has been updated recently, so on n8n desktop you will see a slightly different/older version of it for the time being (but hopefully not much longer, an update will come eventually). The only thing to be aware of is that the node will cause both branches to run as it essentially pulls in data from each branch (this is also described here, but often catches folks by surprise).