Is it possible to get the OAuth2 URL for connection that is called when we click the connect button ? 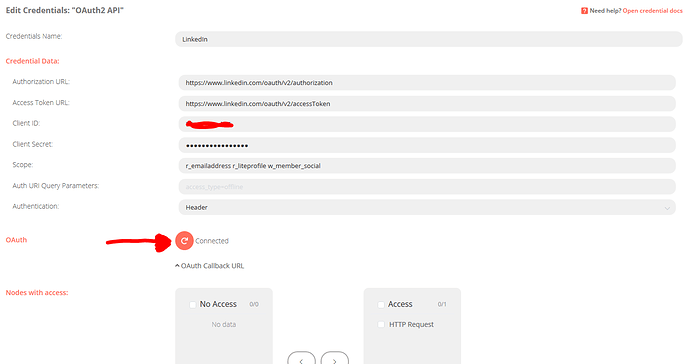 Do not really understand but a few things:

Does everybody in your company have a different n8n instance? Because in this case it would be best to set the OAuth App credentials on a global level via the overwrites here:
https://docs.n8n.io/reference/configuration.html#overwrites-for-credentials

Like that everybody in the company could use the same OAuth2 App from LinkedIn but they would not see the Client ID and Secret and all they would have to do is to press “connect” and then select their account like in any other application. This will however only make sense once the LinkedIn node got released, as an overwrite of generic base OAuth 2 credentials would not be a good idea.
The good news there is that the node will probably be released in the next days.

Thanks for the overwrites-for-credentials I will try that. As of now I have created instances for each user in the company (around 10-15) and have imported my workflows in their instances. Most of the employees are non-techie and so I was thinking of giving them direct URL which we get after clicking the connect button. So they can authorize their Account with my LinkedIn App. So it is just like the URL I get and just change the server:port parameters in the URL and it should work ?

No is sadly not that simple. The only other thing you could do is to create a workflow on your instance (where it is authorized) and make that workflow callable with the Webhook-Node. Other people in your organization can then call that workflow via a HTTP Request Node and post that way.
Just to be sure that nobody outside of your organization can use it you should however make sure that authorization gets activated on that Webhook-Node.