I am trying to some text value from API call and formatting it in set node using expression. I can see the correct result in Result panel of expression but node is not returning any value. Attaching screenshots for reference. 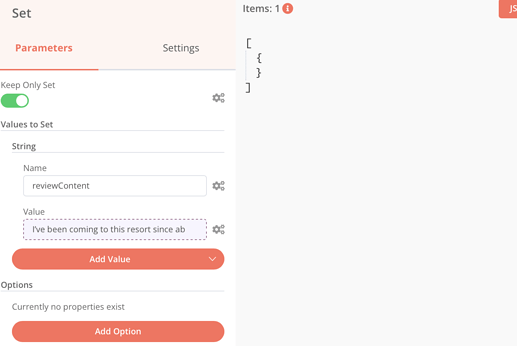 Hi @Mustafa_Ali, the problem would be similar to what has happened here:

Hi @Shirobachi, woah, that’s a funky one, took me quite a while to figure out. I was first looking at the MDN page for .replaceAll() (from your screenshot) as I had no idea it exists: And at the very bottom it has a compatibility matrix, suggesting it’s only supported since Node.js 15. The n8n docker image is however built on Node.js 14. So what has (most likely) happened here is that your browser supports .replaceAll() (which is why you can see it working in the preview), but the server ru…

In short, .replaceAll() is supported by your browser (which is why it would be working in the preview), but not the Node.js version your n8n instance is using. Instead of using .replaceAll(), you could simply use .replace() and should get the desired result.