Do you know why there can only be one branch of Notion nodes running at the same time ?

I want to maintain a database of the Notion users of my workspace with their email address and their Notion ID.

I have a workflow that relies on two Notion nodes :
1 - getall : user to retrieve all the IDs
2 - getall : databasePage where I get the new users to add to the main database with their email address

Ideally I would like to create a new database item including the ID of the first node and the email address of the second node. But as soon as I run a node, n8n forget the output of the other node.

Do you know how I can overcome this limitation ?

Many thanks for your help 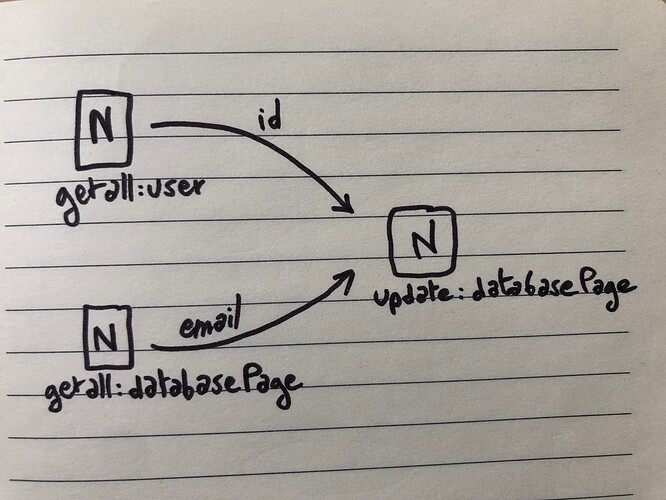 It sounds like what you might want is the merge node that will let you merge the items from 2 nodes and work with the output as needed, Something like the below might be what you are after.

Many thanks Jon, this is clever and it could do the trick.

I will try it and keep you updated !

Have a great day !

The “merge” node works well for my use case.

I struggled at some point but I found the answer here :

@maxT Thanks for the input. I made the recommended changes, and both input’s resolve to the same output, but still all 4 items are passed through when it should only be 2 items. Yes hints would help. Especially when one has very similar (identical most often) UI’s from node to node, all with gear icon that allow one to browse for expressions. There is no way to know what 1 node uses over another, for many nodes. [New Note] I am messing with the mock up data to insert an email address, which…