Notion Trigger not working or working only on Execute Workflow

I’m desperately trying to build Notion - Google Calendar sync. I have two triggers: on a new item and on update items. And it works very badly without any clear logic.

What can be the reason? 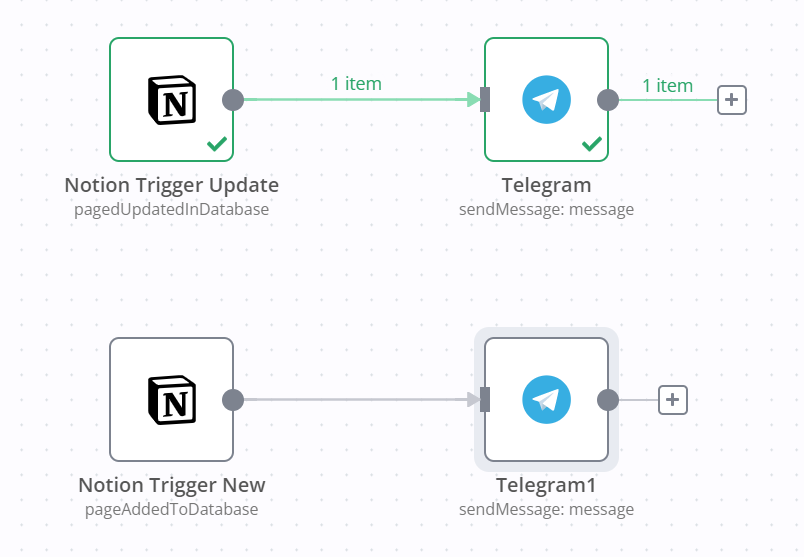 I just Today had similar problem, be aware that you need to let n8n how often it should look what new pages (I think it was added with some n8n version)
In my case, added pooling every minute to resolve problem (I am using version 156)

Let me know if you have futher questions.

HI @Shirobachi. Yes, I set both triggers for 1 minute polling. It works so bad that I’m frustrated. It is completely unpredictable and depends on the Execution button and on re-saving the workflow.

Thinking about comparing data versions and acting if something new in Notion data.

About comparing data, you may check last update props. But let me know what version do you use.
Try this, disable update trigger for a moment and make new page, be sure at this time to workflow be active. In my case it works with delay but always work. I know that in notion edit and created are related, so maybe it causes some problem (if you create new page at 5:15PM then edit time will be same)
If will be working for new data trigger you could try after update trigger make filter edit time not equal created time (via function note the easiest I think)

Disabled the Update node and waited. On new records the New trigger catches and sends data of some previous data. Like 3 or 4 records before. Seems like there’s some queue and the trigger pulls not the latest one.

Did you get the newest added?

The problem with the Notion trigger is also that it can miss some of records, if they all were added during the polling time.

See the full thread here. In the table below records in the red rectangles are not caught: 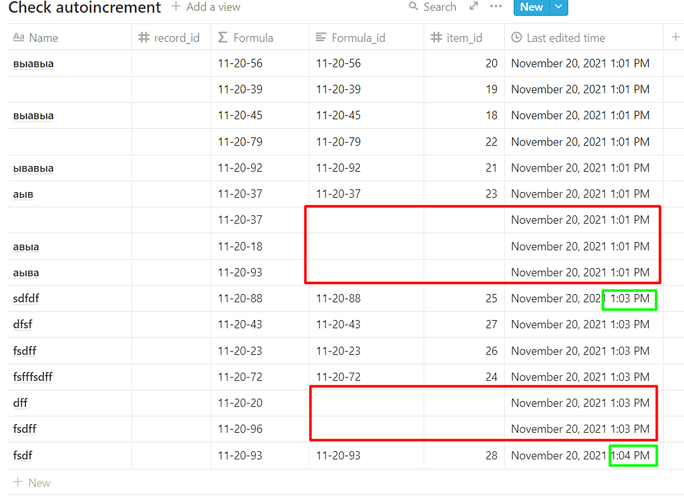 Honestly, I don’t know how to fix this. If I were you at this point I would add checkbox props and I would get all pages where this props == false, do what you need and check this props to true.

Sorry that I am not able to help you better ;/

That’s ok. I hope, it will draw the community attention.

Thanks very much both for raising this! I haven’t worked too much with the Notion Trigger yet but have blocked some time tomorrow to take a closer look into what might be happening here.

Thank you, that would be great

After looking into this I could identify one case where records where missed by the trigger node. The Notion trigger node compares the internal ID of the previous record which it discovered as having changed with the ID of the last updated record it receives when querying Notion (here).

So where you update a record (which is found by the trigger) and would then update that same record again it would miss the second update. This would also miss records that have been updated in the meantime if the last record you update between polling intervals is the one that has previously been found by the trigger.

I shall add this to our bug tracker for a closer look and hopefully resolution.

Until then I think @Shirobachi approach should be fine for many use cases. If you need to control the polling logic yourself you can always use the approach described at Creating triggers for n8n workflows using polling ⏲ to fetch your relevant records. There unfortunately is another bug with the Notion node (not the trigger) requiring you to use JSON filters to query dates, you can find an example for this in the respective forum topic: Notion wrong send request since [email protected] - #14 by MutedJam.

Please accept my apologies for this inconvenience.

I hope that this would eventually solve proble with the Notion Triggers in both regimes (New and Updated).

For now, I developed such a versioning polling workflow. This is how I add a new GCal event from Notion. And checking that it wasn’t created in GCal by hands so there’s no need to go to Notion and create a copy.
I can develop this for Updating and Deleting GCal events

Hi @MutedJam did you solve the problem? Same issue for me… Regards, Jean

I’m running into the same issues and would love to see these triggers work to automate flows between Notion and Todoist.
Is there any update yet?

Thanks for your time!

Hey @Defarax, welcome to the community

I’ve just checked the status of the bug ticket I had raised when first reading this but it seems it was closed in favour of the below community PR:

There are a few complaints about the notion trigger so I thought I could try to …propose something. The existing strategy is using timings of the call in order to decide which records to process and that can be risky especially on a 1 minute poll since there could times where the poll firing doesn't happen or happen too late because of the server being too busy... Plus it was checking for the last process record id to decide if there was a need to process thing which can be really wrong in the update mode where an object can be modified at different times and should be reprocessed. So here instead I'm using the date of the last processed record as reference and processing any record from after that time or (since Notion timestamps are only down to the minute) from the same minute but that I didn't save as processed. That may be one contentious point here: in the documentation it is explicitly said to keep the static data to a minimum and here I'm saving an array of ids which is unpredictable in terms of size so I capped it to 10.

It seems priorities have changed a bit on our end since this came up unfortunately, so I don’t have an ETA at this time.

Please accept my sincer apologies for the inconvenience this causes

Hello @MutedJam, any update on merging this PR? Hoping to move our team over to n8n, but not having reliable Notion nodes is a dealbreaker for us

I am afraid I haven’t gotten any news so far. Perhaps our product man @sirdavidoff can share a timeline on this?

Welcome to the community @elliotmatson

It works just fine for “On Page Added”. The issues we have seems to be “On Page Updated”. Will have this fixed this week.

Hey guys, any update on this? Anything I can do to help test or contribute?