Problem with clone and build version 0.186.0

I build a process in nodejs the clone n8n and build I have problem with lerna I didn’t make any change in my side, the process is this :
git clone --branch [email protected]
npm install --global [email protected]
inside n8n folder run:
git reset --hard
git clean -dfx
npm i
lerna bootstrap --hoist
npm run build
npm run start 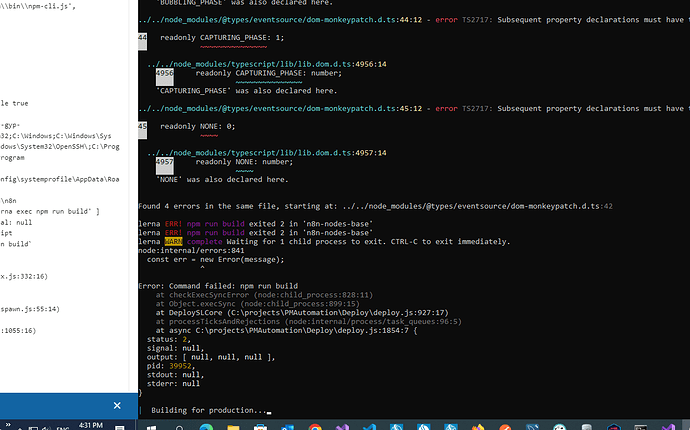 I would recommend using the latest version as we probably won’t go back to fix a bug with the older release.

I am not sure why you have the npm i in the command list though, I think the lerna command did all of that so you didn’t need to so it could be that by doing this it has broken something. I would do the reset again and this time don’t do the npm i and see if that helps.

As a starting point I would just follow the older instructions and see if that works then look at adding more packages.

where can I find them ?

They would be what I suggested before, skip the npm i and do the rest that will then let us know if it works and it can be taken from there.

it works but now I miss some packages that I need to use, for example, I create a custom module with functions that I want to access through the nodes(function node) another example I need this package

unzip a zip file into a directory using 100% javascript. Latest version: 2.0.1, last published: 3 years ago. Start using extract-zip in your project by running `npm i extract-zip`. There are 1178 other projects in the npm registry using extract-zip.

Now you have it installed you can try installing your other package. Maybe doing a -g on it would help but n8n is working now which is perfect so you have a clean base to start working from.

Which directory of n8n are you adding your package to?

I don’t understand, it’s the folder that I clone from git

do you have basic tutorial that explain how to clone and install n8n from git ? (i ask because i remember that the last version not require the lerna)

I continue to try different things now I am using the latest version but I can’t import workflows using the cli, is it still supported?

ok, i tried to install the latest version and i get an error, what can i do ?

after installing pnpm the installation success to finish, but after that, if I want to import workflow I get an error message that commands import:workflow not found

When you uses pnpm did you follow the steps we recommend or try your own?

With pnpm it would first be an install then a build so it would be worth making sure that was done.

I am not actually sure why there are so many issues but I also don’t tend to use external node packages so it could be that something is missing there.

With pnpm it would first be an install then a build so it would be worth making sure that was done.

you mean that i need to make build ?

I take it as you missed the build step you have not been following the documentation on our GitHub repo for contributing? This covers how you can get up and running from Git but I suspect you may still see the same issue.

can you give me the link ? because all i can find is about docker

thanks, so now i don’t need use some of the command that i used before like lerna and more, good improvement