I’m trying to get the record “id” by filtering the list of records in a database using a reference number from a newly submitted form in my app. I tried using the “IF” function, but it’s not working.

Step 1:
I get a trigger from a webhook containing the information from a newly submitted form in my app.

Step 2:
I send HTTP GET to obtain the list of all records of the form submitted in my database in JSON format.

Step 3:
I clean the unnecessary headers and stuff using the “Set” node.

Step 4:
I split the items of my JSON using the “Function” node.

You can see that there is no result in True Branch

But when I remove the Expression in Value 2 and input just the ReferenceID. 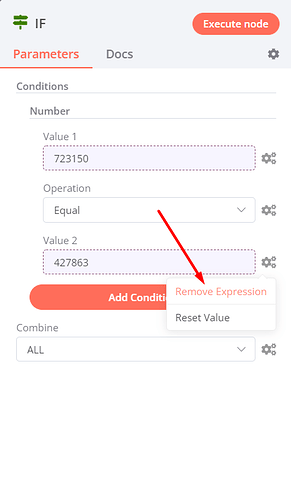 **I need to filter ReferenceID to get the record “id” which the webhook doesn’t have and I need it.

Hi @ruel.lago , try this instead, I set the top value on the IF node to parse the integer. I found the result on this post. :

Thank you for trying, appreciate it. But it didn’t solve the problem

I Already took note of some of the threads here like https://community.n8n.io/t/if-filter-does-not-work-with-hubspot-trigger-node/3431/3

** Same problem. If I remove the Expression in Value 2 and use just plain numbers, it works

Hey @ruel.lago, the latest example you have shared wouldn’t work because your expression doesn’t return anything (it refers to a Webhook node which isn’t present in your workflow).

Though I think I might have an idea what’s going on here. Your “Split into Items1” node (btw, this could also be an Item Lists node splitting out your items - that way you don’t have to write code) returns 16 items, but a webhook would typically have a single item only.

However, if you add $item(0). to your expression like {{parseInt($item(0).$node["Webhook"].json["body"]["ReferenceID"])}}, the comparison should work as expected:

I applied this on my workflow instead of the Function node.

By adding $item(0). the IF node successfully filtered the Value 2 like a charm

Been working on this for 3 days already and I finally decided to get help on this community which I find very active. Thank you!

Awesome, so glad to hear that was it! Reach out anytime in case something doesn’t work as expected

I have the same problem when I use a string, how do I solve it?

Would you be able to open a new thread and include a bit more information, I ran the workflow you provided and I get some data to true and some to false so it is hard to see what the problem is that you are having.