Mautic contacts & Company search set to 30 and when I try to change it over 30 it will automatically be reset to 30.

For now, I use a workaround by setting the number by using the “Edit Expression” and it works just fine.
Not sure if there is a reason for the default to be set to 30 or if this is just a bug 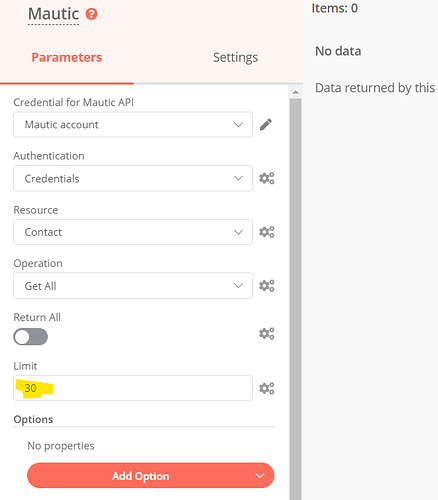 Here is a short screen capture of the bug in action: (Video) n8n mautic bug?

Would be nice if we can fix this small bug

This one is interesting, So it looks like Mautic has a limit of 30 so you can pick anything up to the first 30 results to get if you wanted to get more you would have to use the “return all” option then cut it down.

I am not sure if we actually do anything with other nodes to support going over the single API call limit, Out of interest is there a reason as to why you would go for 40 over say all of them?

So, I have a workaround… but it would be nice if that limit was not there so I wouldn’t need to use a workaround to do such a task.

That is interesting, Just took a look in the code and it looks like we do set a maxValue of 30 for that field. I suspect whoever made the node looked at the Mautic API docs like I did and noticed they default to 30 for return results and the call is a one off hit rather than a looping one.

It looks like the max value for that would be whatever Mautic has to be configured for the pagination limit under config/local.php for default_pagelimit it would be interesting to know if yours is set to 30.

The UI limit is something that can be removed fairly quickly but it would be nice to know if there is a limit or if is tied to a Mautic config option.

That is interesting indeed.
I didn’t change my mautic pagination limit and I can say that I have been able to pull way over 30 records using the mautic node.

But if mautic says the limit should be set to 30, maybe it shouldn’t be changed and people like me will simply use a workaround 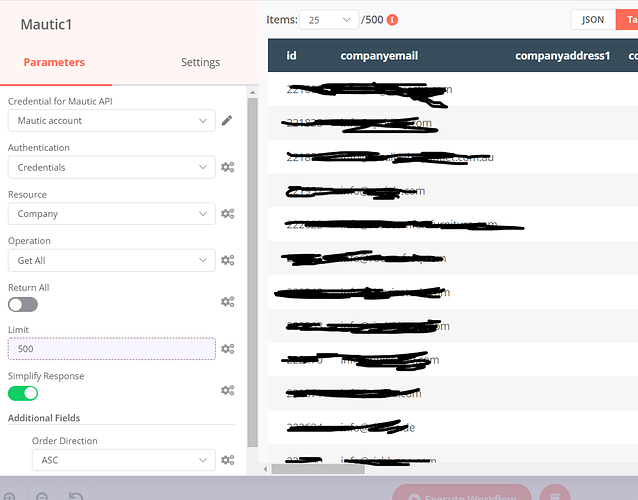 As it lets you go over way over the limit I suspect that key has 2 different uses, I will pop in a change later today / tomorrow morning to remove that limit just to make life easier.

@jon - Amazing!
Yeah, I have been going way over that limits in my tests as high as 2500 records at once.

And both Mautic and n8n work with the data like a charm!

I have to ask… Why not just use return all?

if I user return all, then I would need to make a segment in Mautic or I would need to use a more well-defined search and even what I do so it wouldn’t solve the issue since I might still have a list of 10k records in the search so return all would crash mautic if I have too many records.

So as things are right now the only options are 30 records or all (and all can be too much for me to handle in one batch : )