In the latest version, where the Function node has been replaced by the Code node, there is no longer the ability to pop open the code editor, which was much more comfortable to write/manage code.

Also, the old editor had an options dialog which often proves pretty useful: 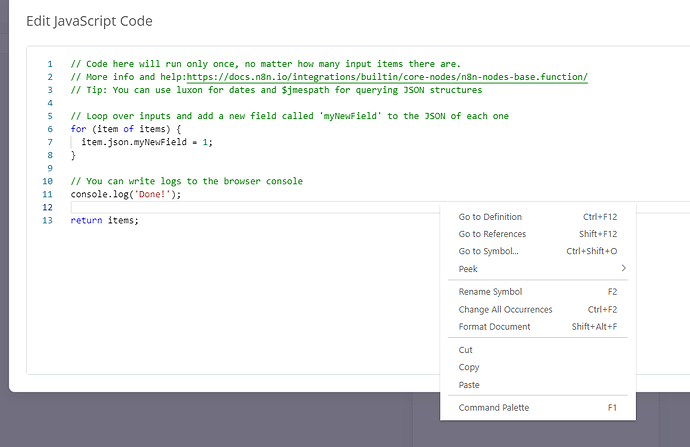 Would love for the new node to also have these useful capabilities.

I would also like to be able to make the window larger since I write a lot of code inside n8n.

But even more important, I’m not sure if I am missing something, but some of the really handy “visual studio code”-like shortcuts, like cmd + k then c to comment out lines and shift + alt + arrow up or down to duplicate rows is now gone in the new version. Is there any chance they could come back please N8N?

We changed to a new editor behind the scenes which is why a lot of the shortcuts are no longer there, Would be handy to have some shortcuts added at some point though.

Thank you for the answer, it certainly would, at least some these more common variants.

May I ask what editor it is you are using now?

You can always ask, It would be hard for us to hide it as our source is available on Github

We are using https://codemirror.net/ now

Are the shortcuts for the code node planned or is it a long way into the future?

Good question, I can’t see anything for them. I have just taken a look though and adding a comment can be done with cmd + /

It could be worth a feature request just for the shortcuts.

I am joining this feature request.
The previous editor was a lot better:

The new one also outputs the spread operator as an error! 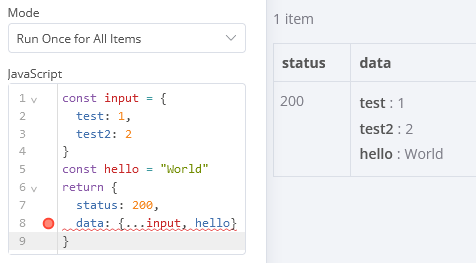 But the new names for the input I find intuitive

All in all, however, I find it to be a step backwards. Sorry…

After all, we learned that it’s okay to ask questions

Here’s mine: What made you switch the editor?

@ivov may have more information on the change in editor, I think it might have been a performance thing and by using this new one we may have more control to add features to it in the future.

I kind of went the other way with the node and I personally find the new input names annoying but I have been using the old way for over a year now so it could be that in a few weeks I will be happy with it. I do prefer the new editor though.

What makes the new editor better than the old one? Have I not discovered a feature yet?

I have partly had over 500 lines of code in the node without performance problems. When I used the new one for the first time (without the performance patch), it already jerked when just deleting. And partly I still have the feeling, if I want to edit the code after a run with a lot of data, he calculates with each input something in the background and brakes out with it. Well the completion on first level works better but already in callbacks [].map() it can’t handle the variables anymore. And the line break bothers me so much, that I partly write the code in my IDE now. 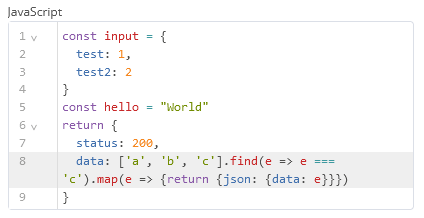 Yes, you can distribute the code on several lines, then it works halfway with the line break - only then I miss the auto-formatting (shift + alt + f).

You can adjust the editor width by moving the sides of the param pane. Max size should be similar to Monaco.

Regarding performance, are you still seeing a slowdown after the patch that you mentioned? If so, can you please provide details to reproduce?

We moved to CodeMirror as it is more flexible and configurable and better supports our upcoming features, particularly the expressions work that is underway. This will require reimplementing part of what Monaco brings out of the box.

It must be said that not only the code block is slowed down - it affects the whole interface. I can’t explain it, but on Windows the flow is not editable after the run. Under Linux/Ubuntu it still works to some extent.

The Linux/Ubuntu is a very small external VM. The Windows version is used locally.

While we are on the subject of bugs:

Should be an error: Duplicate declaration

Should be an error: Attempt to assign to const or readonly variable

Hey all - Max from the design team here. I just wanted to let you know we’re aware of this thread. We’ll be prioritising the bugs + missing functionality from old version on a rolling basis, along with new innovations, so please do keep posting here.

The code node (or function node) is one of the most used and popular nodes in n8n. So beyond me just saying “we’re working on it”, hopefully knowing it’s also our strategic priority to make it awesome & intuitive gives you some confidence.

Building off of what @ivov said - codemirror is going to give us so much flexibility to release functionality for both code node and expressions; things that we’d have to write wholly ourselves with the previous code library. Specifically, they have a lot of flexibility around autocompletion/ prediction etc.

That should mean that the velocity, and general quality, of improvements and innovations to code node should be faster in the midterm (and shared between code node + expressions).

At the same time, there are some growing pains to switching such a core library, as you’re seeing with Code node. So I do sincerely apologize for and empathize with any frustrations you’ve had in the short term with Code node. We hear you. We appreciate your feedback, and we’re workin’ on it.

Hope everyone has a lovely weekend, and thanks for all your feedback!

Thank you for reporting.

Double constant declaration is not linted but will throw on execution: Identifier X has already been declared Adding internally as a feature request for the linter.

As you mention, the slowdown is UI-related rather than specific to the Code node. Will bring it up with the FE team.

Just installed n8n for a review and struggling with the new code node, as most of the examples everywhere refer to the old function nodes…

So going to be downgrading to an older release.

Which examples did you find? There are a lot out there but other than how we refer to the input variables the rest of it would be normal javascript.

If you can send over what you found we can update them if they are on our site or documentation.

I just want to add my post here, which I created a few hours ago. Thank you @shrey-42 for making me aware of this thread

Hi
firstly, many thanks for the amazing work all the contributors do!

What I like about the new block, is that I can run it from being in editing mode.

Howover, I see several disadvantages of new “Code” Node. Here are the reasons:

Plus adding another question: why the hell did you move away from the old editor(vscode) at all?

Oh hell, after several days I am now really frustrated with the new editor.
it is slow, code completion sucks and I just want the old one back.