Some inspiration from another workflow system

It has some great workflow features that I would like to see in N8N as well:

The conditions (IF) block has an unlimited amount of “paths”:

You can create blocks of nodes to make the workflow better organized:

And you can create reusable packages that you reuse again and again across workflows: 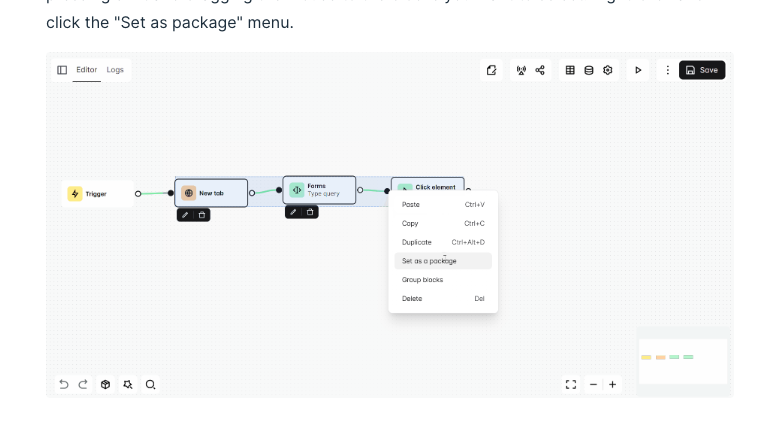 Agree these would be great, they already partially map to some existing feature requests. Make sure you pop a vote on the ones you want to see

The conditions (IF) block has an unlimited amount of “paths”

Is there a way to add more “outputs” to the switch node instead of the default 4?

and on the other end, multiple merge inputs

REgarding Merge Node, provision to accept data from “multiple nodes” (and not just two) to merge the data into single So the Feature Request is to ensure have the “Merge Node” to to be enhanced to accept multiple inputs The idea is: The idea is as per the question below (Merge node: Can it accept more than 2 inputs?) Currently, the workaround is to nest multiple Merge nodes. But this get complicated , for instance for a 8 input set, you need to have 4 + 2 + 1 nesting (i.e 7 merge nodes) whi…

Create blocks of nodes to make the workflow better organized

The idea is: To add an ability to group flow items or add a boarder with titling around certain flows. It would allow for some visual view of what certain node groups do and how they work together outside of other node groups. My use case: I am building flows to sync different types of systems and I have groups of nodes doing certain functions. It would be nice to show a grouping boarder around these to show how they are separate. I think it would be beneficial to add this because: Better v…

At the moment this can be done by calling a sub-workflow, however there is a request in a similar vein for templating the HTTP node

Given that we already have a plain HTTP Request node and many possible nodes are just plain “Make an HTTP GET/POST request to an endpoint”, what if there was a way to make a “Template Node” which users could make in order to make custom nodes. Example: the current discord webhook node does not allow the usage of Embeds or modifying the author’s name. What if I could take an HTTP Request Node, add in the JSON body for the payload, and then use that request as a “saved template node” for future r…